Follow me on Tumblr | Leave a tip on Ko-fi | Bug reports: tirankawrites@gmail.com

"The Hunt" is planned to be a triology of interactive fiction games. This is the first book "Demon Eyes".

TH:DE is an urban fantasy story with horror, mystery, and some optional romance elemets. There might be scenes that can be disturbing to certain readers, such as the description of a rotting body, possession, memory loss, blood, etc. The recommended age is 17+ with the potential to go up as the game progresses. Reader descretion is advised. A full list of content warnings can be found in the game.

You are a hunter, as everyone in your family has been for generations. But you don’t simply hunt deer or rabbits. No. Your prey is much more vicious. You hunt the things others only know as myths and legends; the things that lurk in the darkness.

It’s all you have ever known; all you ever did in your life. That is until you went after a certain demon only to end up possessed by it.

Two years later you wake up in Maidenbrook, the capital of everything you have been taught to hunt. Surrounded by supernatural beings and no idea what happened during the past years, you try to retrace your steps and learn what the demon did to you. t’s is not an easy task as you try to navigate the supernatural society, which is just as wary of you, as you might be of them. You can only hope the demon won’t try anything else.

Bas  Reid [he/him]: A fellow hunter, who left his family behind to find his own path as he goes against tradition. He is a charmer with a knack for witchcraft and an interest in the supernatural. He only moved to Maidenbrook a few years ago but seems to have a dream to fulfill in the city.

Elian Young [he/him]: A young man just having begun his residency at one of the local hospitals. He seems to be a supernatural, though it is hard to identify what kind exactly. Awkward but kind, he seems to have a hard time in Maidenbrook despite living there for several years now.

Lupita Vaquera [she/her]: A cheerful young werewolf, who found her place in one of the local packs. Having grown up rather sheltered from most supernatural communities and therefore the danger of hunters, she seems to be more excited than suspicious about the latest addition to Maidenbrook.

Nasim [they/them]: A djinn and the owner of the local shop for witchcraft supplies. They are eccentric and playful, yet they seem to distrust anyone whom they haven’t known for at least a century. And while they are curious about you it seems evident that they are hiding... something.

Theo Cossini [he/him]: A werewolf and the alpha of one of the local packs. He owns a rather popular bar in the inner city, which might seem contrary to his rather stoic and quiet demeanor. He moved to Maidenbrook after he was attacked by an unknown werewolf, turning him too into one.

Veye [she/her]: A jengu and ambitious politician who is part of the supernatural council. While Veye is one of the few council members who are very diligent in their work ethic, she is also one of the few willing to believe that not all hunters are irredeemable. Maybe she will extend this opinion to you too.

Xiuying Zhou [she/her]: A rogue, a hunter who was not born into the lifestyle. She appears harsh and stand-offish at first glance but seems to have at least a hint of a soft core inside of her. She is anything but happy to be in a city filled with supernaturals, even less so when she runs into you.

:0 Been a while since I've seen this one, super glad it's back! It's got so many new features, very cool! Can't wait to see more :D

Hi! So it's been a while since I last read the game (was still back on CoG) and I just wanna say I love it even more now... Aside from the new look and all, I also really like the new ways to earn different kinds of relationship points (and their indicators) ~

I like the option to have a second set of pronouns, never seen that used in a game before. I'm neutramale, and I use he/him, but I have no problem with they/them. I'm sure many other people will appreciate it even more than I do.

Hi!! Sorry If I ask something stupid xd. Is the game completed or it only has a few chapters?

I know it's in development, but I know other games where they are "in development" but in reality they are already finished and the author just uploads updates for fixes/bugs, so I just wanted to know if this is a similar situation or not. Either way I'm gonna try the game! I liked the story and I'm very intrigued and I want to know the characters! The fact it's gonna be a trilogy makes it better!

Not stupid at all :)

This is currently only the prologue and the first chapter of the first game. Currently there are 12 chapters planned for the first game. So this is very much still in development. Chapter two won't be out for a while though since I'm currently very busy with uni ^^

Thanks for asking and have fun playing! <3

Hey, as I was playing: in "2 years" segment option "I need to hold something. Someone. I reach out towards him. “Please?” despite 'him' being Lupita.

I'm still playing but so far this is absolutely wonderful, many options to make type of character I'd like and being able to see influences of stats is wonderful, english is not my first language and I don't always get a hint on which would raise what stat.

Ah! Thank you for pointing it out, I will fix it with the next update/if there are more glaring bugs that need fixing :)

the last sentence in Veye's description probably lacks a "not" all hunters are irredeemable? It's almost definitely a mistake, but it cracks me up. Might not want it on the front page though?

Lol fixed it, thanks for pointing it out! 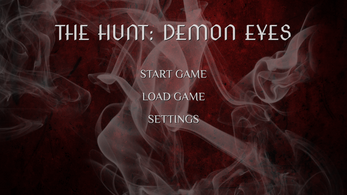 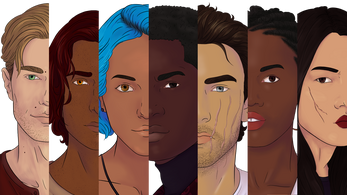 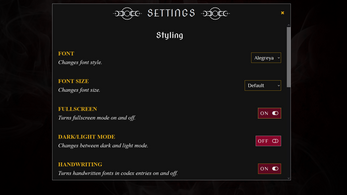 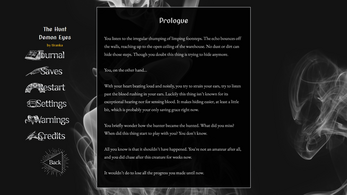 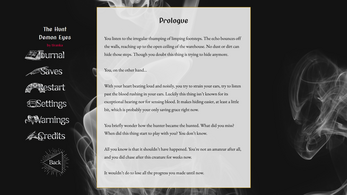